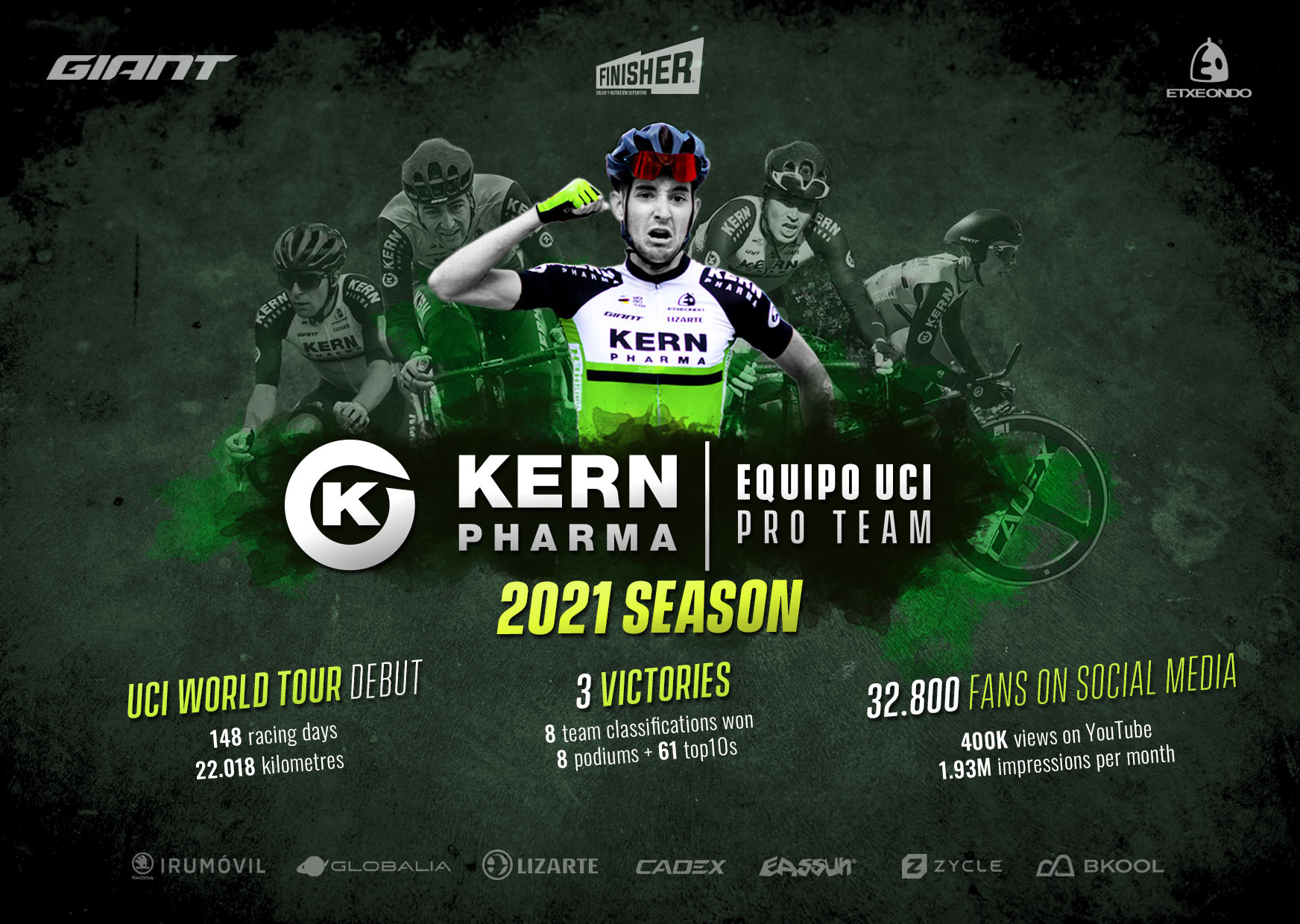 Building up our identity and our future

2021 has been a year of firsts for Equipo Kern Pharma: debut as a ProTeam and on WorldTour races, first victory on a stage race GC, first win in the team classification of a UCI ProSeries event, first trips to Croatia, Portugal, Slovenia, Germany or Slovakia. Landmarks events that are a suitable follow-up for the beautiful story that began in 2020 and have helped build up the identity and the future of the team.

It all started on January 24th with the Clàssica Comunitat Valenciana 1969, a race in which the pharmaceutical team showcased its stout nature and its bold tactics by controlling the peloton during many kilometers. It was rounded off on October 10th with the historic Paris – Tours classic, in which Roger Adrià fought with the best riders for the victory.

And, in between, 148 race days, comprising 22.018 kilometers. 3 individual and 8 team victories, and a plethora of moments like José Félix Parra’s triumph in both the queen stage and the GC of the Tour Alsace or the team’s win in the last stage of the Deutschland Deine Tour as most outstanding milestones. 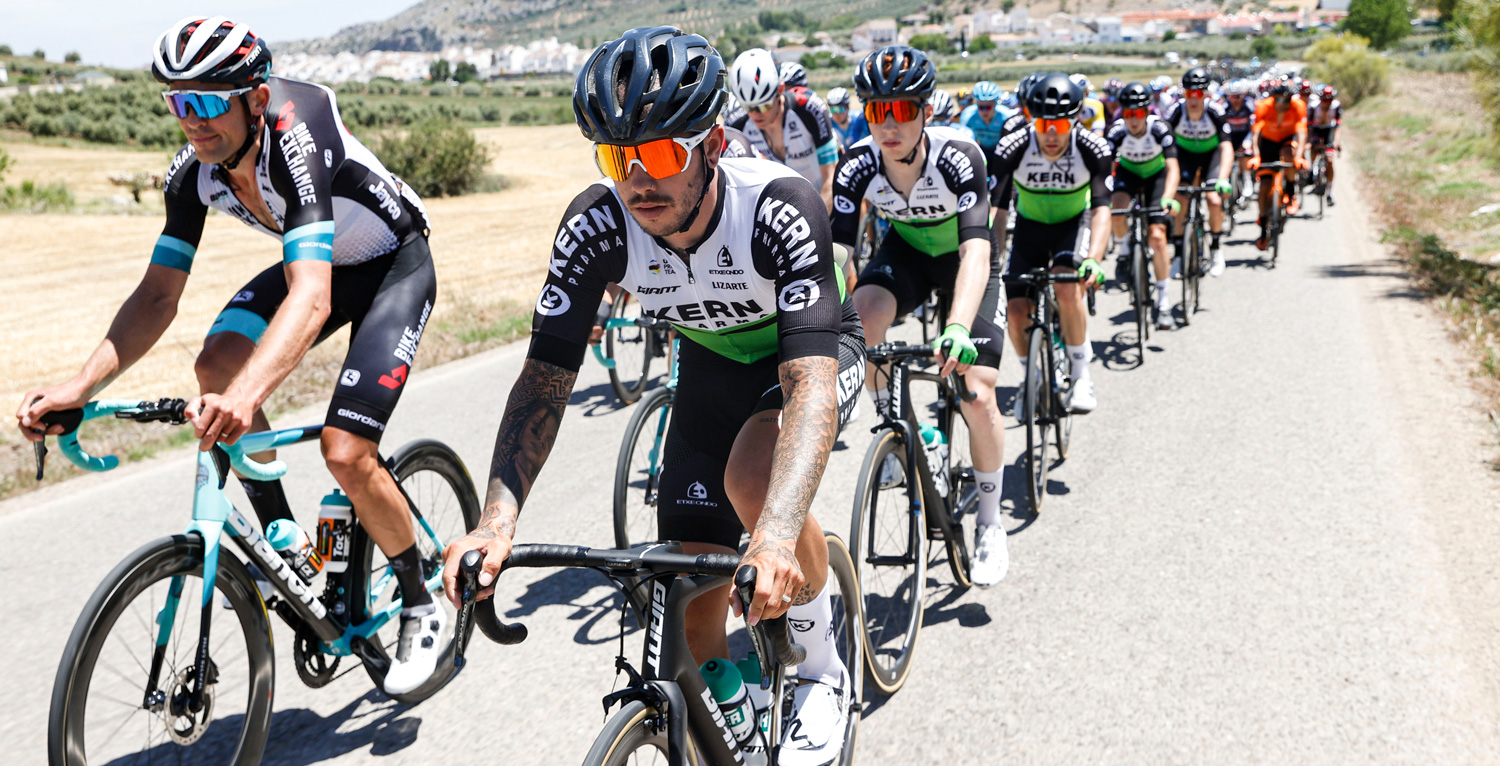 Equipo Kern Pharma’s maiden season in the ProTeam category has been “gratifying and in crescendo,” says Juanjo Oroz, Equipo Kern Pharma’s Team Manager and Sports Director, who highlights the unity and strength of the group: “If I had to assess our season, I would underline that the team is growing and keeps improving in all aspects.”

After a brief stop in July, Equipo Kern Pharma’s riders have been contending for victory at “every race we have entered, which is not easy” and not only have acquired the ProTeam status on the books – they also have “grown and evolved a lot”. “I think we have finished the season three steps above where we started it. Results are not what we look at first, but they reflect our level,” states Oroz.

Manolo Azcona, president of Azcoro Sport, company in charge of Equipo Kern Pharma, considers this 2021 season has been “a pleasure” for his squad. “We’ve seen how the team has grown. We have shown that we are capable of reaching the summit together. I feel satisfied with where the project is heading. I believe that next year we will take one further step forward and we will be even closer to the WorldTour teams.” 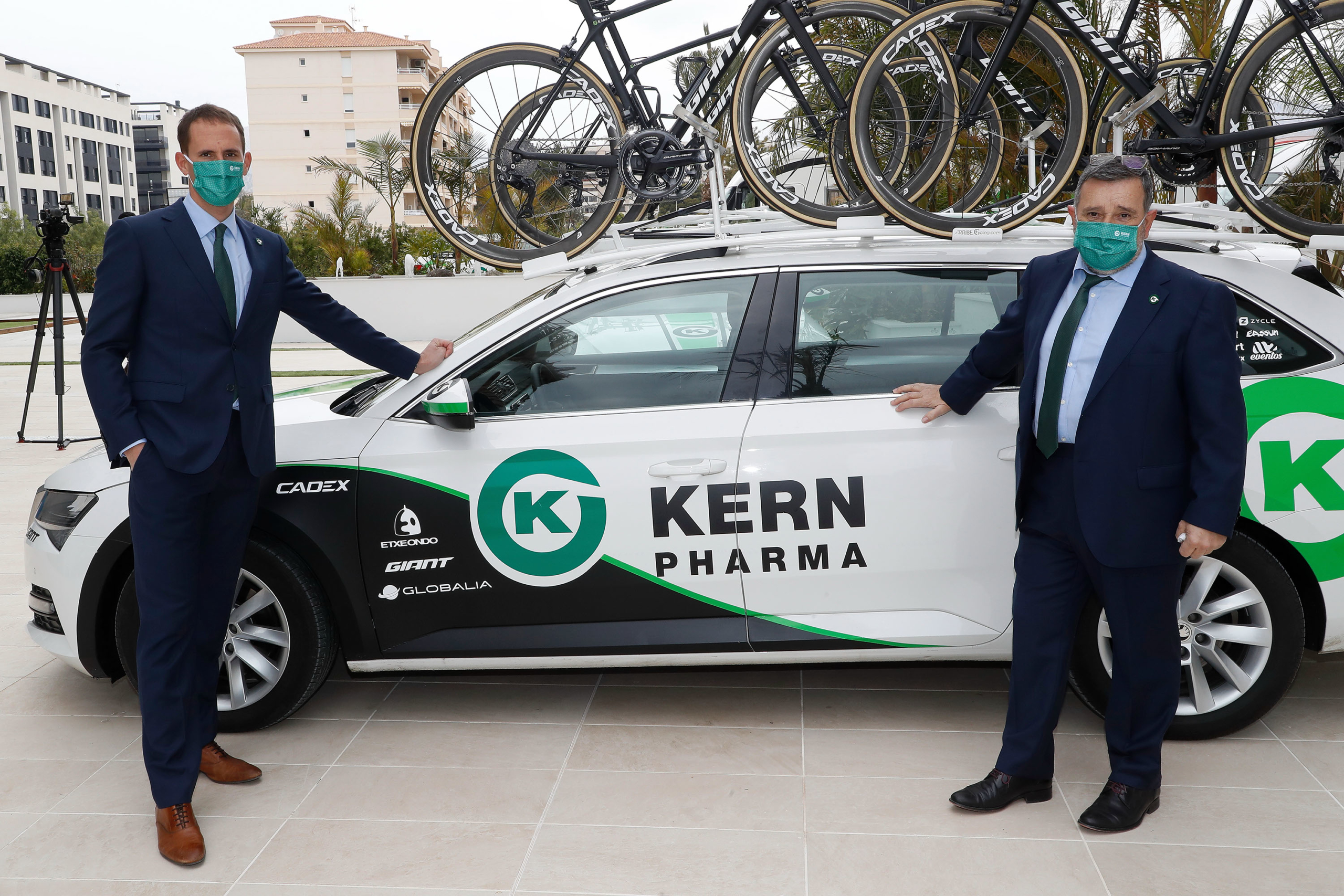 A great team victory. The debut in the Deutschland Deine Tour brought lots of learning under the rain for Equipo Kern Pharma’s riders – and a successful ending. On the last stage, the pharmaceutical team won the team classification ahead of WorldTour outfits such as Bahrain Victorious, UAE Team Emirates or Bora-Hansgrohe. This was the brightest out of the eight team classification victories that we noted down in 2021 – the rest of them were achieved in UCI 2.2 events.

Jaime Castrillo, four-leaf clover. The rider from Jaca has been the only one of the 20 EKP cyclists to line up in all of the team’s three victories this season: Enrique Sanz’s win in the last stage of the Volta ao Alentejo, and José Félix Parra’s triumphs at the Tour Alsace’s queen stage and GC.

Roger Adrià is always up there. With 11 top10 finishes this season, Roger Adrià is the Equipo Kern Pharma rider that has consistently delivered better placings over the team’s first season as a Pro Team. Furthermore, the neo-pro from Barcelona has finished 35 times among the 25 best riders of a race. Kiko Galván and José Félix Parra are close to him in the top10 ranking, with 9 top10 results each.

WorldTour debut. The 2021 season has also been Equipo Kern Pharma’s debut in the WorldTour calendar, with a total of 11 race days. The team has also raced 37 days in UCI ProSeries events, 60 days in UCI .1 and 35 in the UCI .2. As for the countries visited over the campaign, France tops the list, as the team has raced there 55 days, followed by Portugal (23 days) and Croatia (12 days).

A deep roster. The Equipo Kern Pharma riders have proven time and again their competitiveness over this season. Fifteen out of the twenty riders that make up the team’s roster have finished in the top10 of a race at least once. Between them all, they have totalled 61 top10s in 2021.

127,8 kilometers of time trial. 127,8 out of the 22.018 kilometers ridden this year correspond to a discipline that we love: the time trial, be it individual, team or prologue, well equipped with our Giant Trinity Advanced. We have enjoyed the 21.890 kilometers left of standard road racing with our Giant TCR Advanced SL and Giant Propel bikes.

Roger Adrià’s backnumbers collection. With 64 race days under his belt, Roger Adrià is Equipo Kern Pharma’s rider who has taken part in more races this season, followed by Urko Berrade, who has raced 63 days, and Martí Márquez, with 59 race days. The flip side of the coin are Vojtech Repa, who finished the year with 22 race days, and Daniel Méndez, with 17. Their schedules got very reduced due to different health problems.

A young team with a great future. Equipo Kern Pharma began the season as the youngest team in cycling’s top two tiers, with an average age of 22,5 years old. A bet for the future that defines the team, because, according to CQ Ranking, six out of the ten best Spanish riders under 25 years old ride for Equipo Kern Pharma.