Steady steps amongst the greatest

Two remarkable debuts in La Vuelta and Liège-Bastogne-Liège, two unforgettable victories in June and loads of moments of good cycling amongst the biggest teams in the world are part of Equipo Kern Pharma’s assessment of 2022. The team’s competitive year can be highlighted in a single word: growth. The squad has completed a season of progress with a prominent figure of 42 days of WorldTour racing and a lot of milestones that will remain forever.

The greatest landmark for the team was, without any doubt, Raúl García’s gold medal in the Individual Time Trial Spanish National Champonship. It was the first national champion jersey won by Equipo Kern Pharma in its short history and, in addition, this triumph culminated a brilliant racing month in late June. A few days before García’s achievement, Roger Adrià had got the first victory of the season in La Route d’Occitanie. A shortened stage heading the bunch to Roquefort en Aveyron was the scene of Equipo Kern Pharma’s solid teamwork for the Catalan rider’s victorious sprint.

The season has been intense in terms of the amount of competition. Equipo Kern Pharma has completed 165 days of racing from January to October. That figure makes sense when it comes to one of the defining moments of the year: the historic debut in a three-week race, La Vuelta.

The Spanish course was a pivotal moment for the team. Eventhough the riders suffered La Vuelta’s roughness and had to face the abandon of three teammates due to COVID-19, Adrià, Berrade and García were capable of achieving three top10 places in important stages. The squad had also prominence in many breakaways during the entire race.

For Juanjo Oroz, Equipo Kern Pharma’s general manager, the 2022 season made the team ”face the reality of the WorldTour”. “I’d say it’s been an intense season for us. We’ve lived many moments of brilliance but also we’ve had a lack of determination in some others. Anyway, those experiences will help us to open our eyes and be aware of what being competitive means. We are ready for the next step in 2023”, he says.

For Manolo Azcona, Asociación Deportiva Galibier’s president, the team was able to reach its goals. “We are competing at the top level and that’s difficult, but we’ve obtained two remarkable victories and lived our first Grand Tour. That was a tricky exam for us. Ours is a long-distance race and we must go on improving if we want to reach one more step”, he remarks. 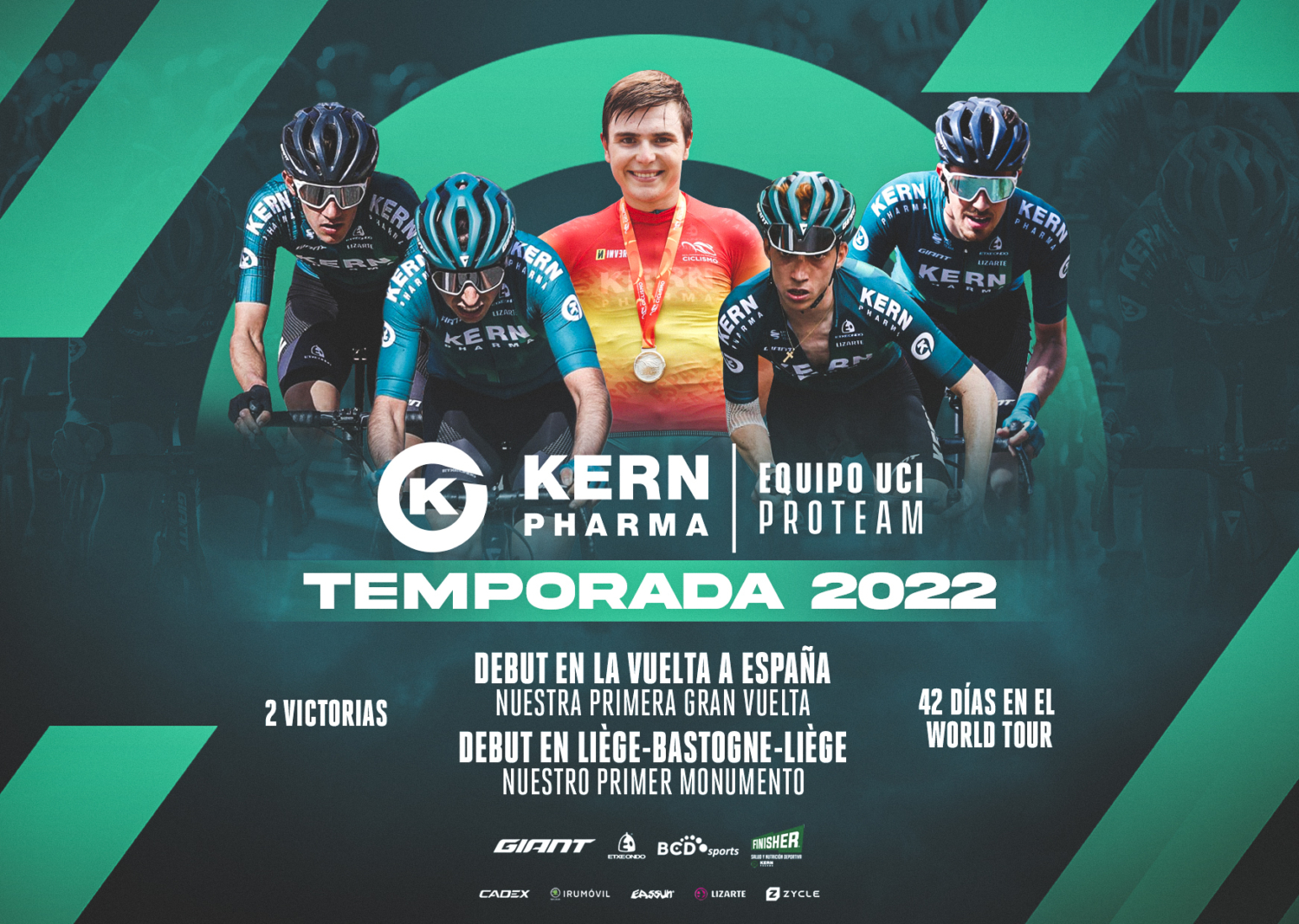 Capable of fighting over. Besides the two victories and the four podiums of 2022, Equipo Kern Pharma reached 27 top10 places in the whole season. The riders showed that they can fight over when they are in good condition. Kiko Galván and Igor Arrieta got four top10 places each, leading this statistics.

Some results to highlight were Roger Adrià’s 5th and 9th at the Road Race Spanish National Championship and Mont Ventoux Dénivelé Challenge, respectively, but also Vojtěch Řepa’s 5th at the Tour of Slovenia and Igor Arrieta’s 6th at the Vuelta a Asturias.

Turkey, a collective success. Equipo Kern Pharma got its only win in a team classification at the Presidential Cycling Tour of Turkey in April. But that triumph was a relieving success after a tough race. Furthermore, the squad has shown determination and cohesion in some other moments of the season, leading the bunch in races like the Giro dell’Appennino, the Vuelta a Castilla y León or the Tour of Slovakia.

Amazing youngsters, a hope for the future. Equipo Kern Pharma’s bet for young talent is the cornerstone of its philosophy and it foresees a future of hope. Riders like Igor Arrieta or Vojtěch Řepa have developed strong performances. Both were crowned as the best young rider in Asturias and Slovenia, respectively. The Spanish cyclist also thrilled the fans with outstanding outputs at O Gran Camiño and the Tour of The Alps. We mustn’t forget the great level that the neo-pros Iván Cobo, Pau Miquel and Eugenio Sánchez have shown in many moments of the season.

Our ‘ironmen’. If there is something that remarks how solid a rider is, that’s the amount of competitive days. In that figure, Jose Félix Parra is the leader of the team, with an stunning 70-day season of racing. Kiko Galván, with 68 days, and Urko Berrade, with 64, are just behind him. The three of them were able to reach Madrid in La Vuelta and have presented themselves as regular and trustable cyclists.